Talking heads: what toilets and sewers tell us about ancient Roman sanitation 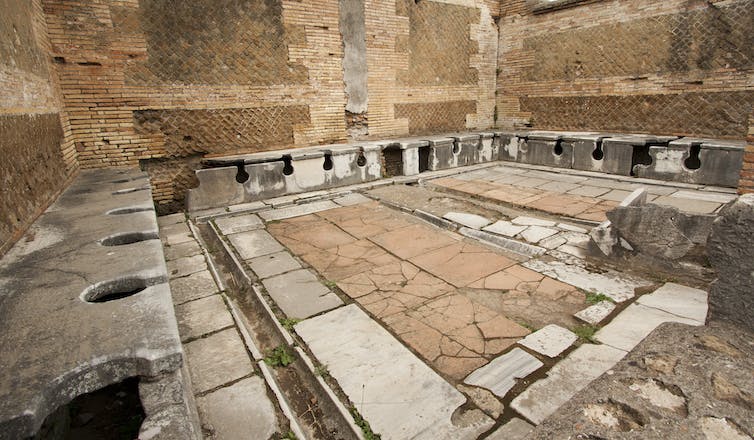 Ruin of a second-century public toilet in Roman Ostia.

I’ve spent an awful lot of time in Roman sewers – enough to earn me the nickname “Queen of Latrines” from my friends. The Etruscans laid the first underground sewers in the city of Rome around 500 BC. These cavernous tunnels below the city’s streets were built of finely carved stones, and the Romans were happy to utilize them when they took over the city. Such structures then became the norm in many cities throughout the Roman world.

Focusing on life in ancient Rome, Pompeii, Herculaneum and Ostia, I’m deeply impressed by the brilliant engineers who designed these underground marvels and the magnificent architecture that masks their functional purpose. Sewer galleries didn’t run under every street, nor service every area. But in some cities, including Rome itself, the length and breadth of the main sewer, the Cloaca Maxima, rivals the extent of the main sewer lines in many of today’s cities. We shouldn’t assume, though, that Roman toilets, sewers and water systems were constructed with our same modern sanitary goals in mind.

The streets of a Roman city would have been cluttered with dung, vomit, pee, shit, garbage, filthy water, rotting vegetables, animal skins and guts, and other refuse from various shops that lined the sidewalks. We moderns think of urban sewers as the means to remove such filth from streets – and of course flush away human waste that goes down our toilets.

Researching Roman urban infrastructure for my new book The Archaeology of Sanitation in Roman Italy made me question whether the Romans shared the same vision. The archaeological evidence suggests that their finely constructed sewer systems were more about drainage of standing water than the removal of dirty debris. And Romans’ sense of cleanliness and privacy around bathroom matters was quite different from our tender modern sensibilities. 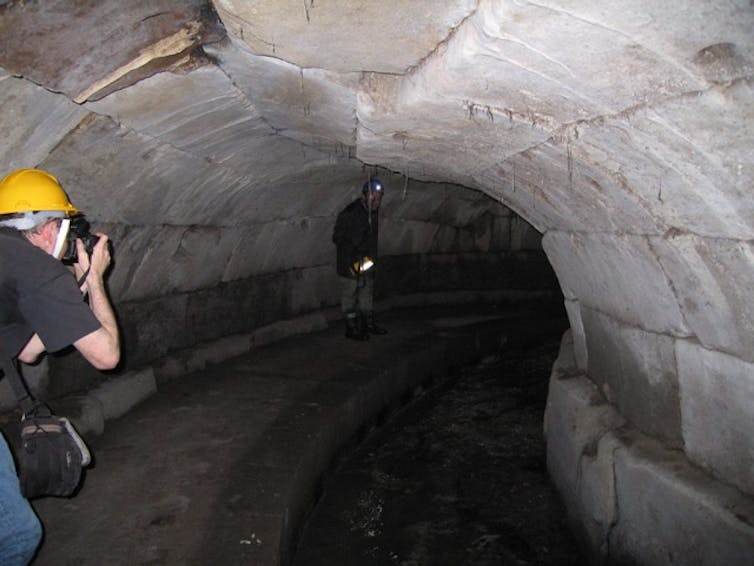 Inside a tunnel of Rome’s sewer, the Cloaca Maxima.

The Cloaca Maxima in Rome was not part of a master plan to sanitize the city. Its purpose was removing water that pooled on the city’s uneven streets and draining water from low-lying areas when the adjacent Tiber River flooded, which happened quite frequently. Its main function was drainage – and what it drained ran right back into Rome’s major drinking supply before the aqueducts, the Tiber.

Roman sewers moved filthy water away from where it hindered cleanliness, economic growth, urban development and even industry. My work in the sewers of Herculaneum and Pompeii – both buried by the pyroclastic flow caused by Mount Vesuvius’ volcanic eruption in AD 79 – has brought me to the same conclusion.

At the bottom of one sewer under a street in Herculaneum, the first excavators found an ancient deposit of hardened sludge measuring about 1.35 meters high. No amount of water, however fast-flowing, would have been able to remove that. Several ancient sources state that Roman sewers needed manual cleaning from time to time, a job often done by city slaves or prisoners. I’d argue these urban sewer systems provided minimal sanitary benefits overall.

Public and private toilets were sprinkled throughout the city of Pompeii. But despite the city’s sewer infrastructure, virtually none of these toilets had sewer connections. We have similar evidence for ancient Herculaneum.

In fact, almost every private house in these cities, and many apartment houses in Ostia, had private, usually one-seater, toilets not connected to the main sewer lines.

And these cesspit toilets were often situated in the kitchen, where food was prepared! The comforting smells from a hearty stew would have mingled with the gross odors from the nearby open cesspit. Collected waste was either sold to farmers for fertilizer or used in household gardens – which must have made for some pretty stinky garden parties from time to time.

According to Ulpian’s Digest, written between AD 211 and 222, connections to the sewers from private dwellings certainly were legal. So why didn’t property owners hook up to the public sewer lines? 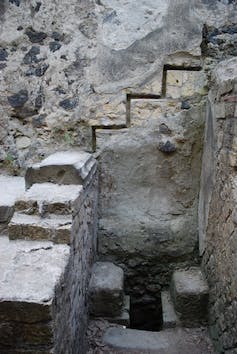 A private toilet under the stairs in Herculaneum’s Casa del Gran Portale.

One reason may be tied to that fact that Roman sewer openings had no traps. One never could be sure what might climb out of an open sewer pipe and into your house.

We have at least one dramatic ancient story that illustrates the danger of hooking your house up to a public sewer in the first or second century AD. The author Aelian tells us about a wealthy Iberian merchant in the city of Puteoli; every night a giant octopus swam into the sewer from the sea and proceeded up through the house drain in the toilet to eat all the pickled fish stored in his well-stocked pantry. 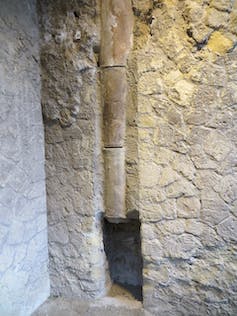 Broken connections in a Herculaneum house’s terracotta downspout within the wall would have caused stinky leaks.

Adding to the stench of Roman life, my close examination of ancient plumbing found that many downpipes from house toilets on upper floors would have suffered serious leakage inside the walls as well as oozing onto the outside of the walls too. The fittings of these terracotta downpipes loosened over time, and their contents would have caused stink everywhere.

I was able to identify at least 15 upper-story toilets at Pompeii and others at Herculaneum and elsewhere. In some cases, I obtained proof through scientific testing for urine and/or excrement that the spillage was indeed human waste from these pipes.

Public toilets held their own hazards

Even public latrines – multi-seater toilets that were almost always connected to the main sewer lines of a city – posed serious threats to users. Don’t be fooled by the clean white marble and open-air sunniness of the reconstructed ruins we can see today; most Roman public toilets were dark, dank and dirty, and often situated in small spaces. Those who could “hold it” long enough to return to their own houses with their own cesspit toilets certainly would have done so.

One public toilet at Ostia, with its revolving doors for access and fountain basin for cleaning up, could handle more than 20 clients at a time. I have found no evidence that Romans had to pay to use public toilets, and we really don’t know who managed or cleaned them, apart from the possibility of public slaves. To our modern eyes there was almost a complete lack of privacy in such facilities; but bear in mind that Roman men would have been wearing tunics or togas, which would have provided more screening than a modern man would enjoy with pants that have to be pulled down. Perhaps a bigger problem for today’s standards of cleanliness: the Roman version of toilet paper in many cases was a communal sponge on a stick.

Even worse, these public latrines were notorious for terrifying customers when flames exploded from their seat openings. These were caused by gas explosions of hydrogen sulphide (H2S) and methane (CH4) that were rank as well as frightening. Customers also had to worry about rats and other small vermin threatening to bite their bottoms. And then there was the perceived threat of demons that the Romans believed inhabited these black holes leading to the mysterious underbelly of the city.

One late Roman writer tells a particularly exciting story about such a demon. A certain Dexianos was sitting on the privy in the middle of the night, the text tells us, when a demon raised itself in front of him with savage ferocity. As soon as Dexianos saw the “hellish and insane” demon, he “became stunned, seized with fear and trembling, and covered with sweat.” Such superstition would provide another good reason for avoiding sewer connections in private house toilets. 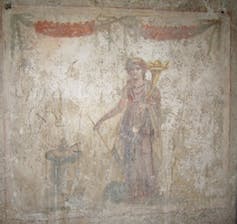 Goddess Fortuna on the wall of a the Suburban Baths in Pompeii.

Going to a public toilet was definitely a dangerous business, so it is no wonder that the Goddess Fortuna often appears as a kind of “guardian angel” on the walls of toilets. We don’t tend to put religious shrines in our toilets, but we find them again and again in both public and private toilets in the Roman world.

One graffito on a side street in Pompeii directs a warning at a toilet-user himself: “Crapper Beware the Evil”… of crapping on the street? Of putting your bare bottom on an open toilet hole for fear of biting demons? Of the ill health you will feel if you do not move your bowels well? We’ll never know for sure, but these are likely possibilities, I think.

When we look at the evidence for Roman sanitary practices, both textual and archaeological, it becomes obvious that their perspectives were quite different from ours. Gaining a better understanding of Roman life on their streets, in their public spaces, and in their private dwellings shows us that they were in the early stages of developing systems that we’ve adopted – with upgrades – for our own problems with sanitation and clean water today.