The monster festival: A pilgrimage to small town America 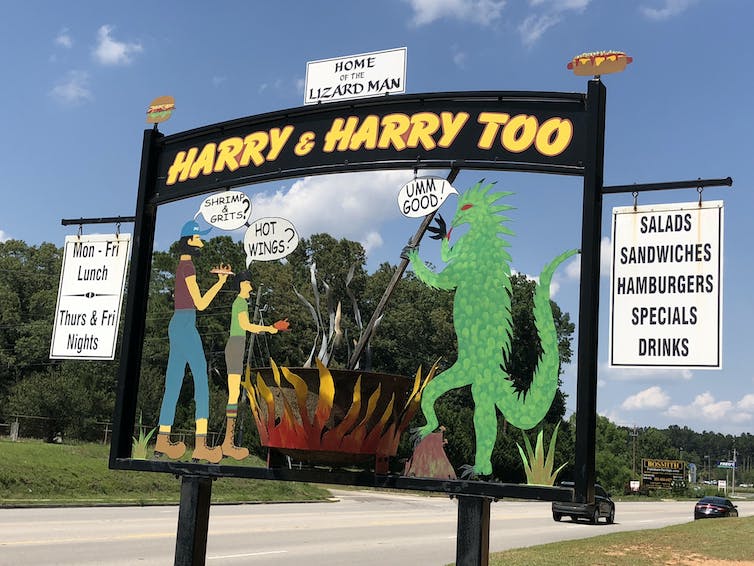 A restaurant in Bishopville, S.C. markets the town’s association to the Lizard Man.

One of my hobbies is dragging my patient wife to small towns to study beliefs and practices related to cryptozoology – the hunt for creatures, from Bigfoot to the Loch Ness Monster, whose existence hasn’t been scientifically proven.

This year, our summer “vacation” included a stop in Bishopville, South Carolina, to attend the first annual Lizard Man festival. The Lizard Man of Scape Ore swamp terrorized Lee County in 1988 – and, according to some, continues to do so today.

Bishopville isn’t the only town to turn local reports of terrifying paranormal encounters into annual festivals. Point Pleasant, West Virginia, has the Mothman festival, while Flatwoods, West Virginia, has a festival honoring the Braxton County monster. And every year, you can go to Fouke, Arkansas, to celebrate the Beast of Boggy Creek.

As a professor of religious studies, I am fascinated by the people who visit these small communities in search of strange creatures, and why many of these small towns have come to embrace their roles as pilgrimage sites.

The legend of Lizard Man

Cryptid researcher Lyle Blackburn probably gives the best account of the Lizard Man saga in his book “Lizard Man: The True Story of the Bishopville Monster.”

In July 1988, the Lee County Sheriff’s Office received a call from a resident in a small community called Browntown complaining that their car had been “mauled” overnight, apparently by an animal.

When Sheriff Liston Truesdale began interviewing Browntown residents, several described seeing a 7-foot tall creature with red eyes – what someone eventually referred to as “the Lizard Man.” Truesdale put the word out that if anyone knew anything about the damaged car or a strange creature that they should contact him.

On July 16, resident Tommy Davis brought his 17-year-old son, Chris, to the sheriff’s office. Chris Davis explained that when he was heading home from his night shift at McDonald’s, he took a shortcut down a rural road and got a flat tire. After he finished changing it, he saw a 7-foot tall, green creature, with three fingers on each hand and red eyes. When Davis tried to drive away, it leaped onto the roof of his ’76 Celica. By swerving back and forth, Davis dislodged it and escaped. Truesdale – who had after all asked the community for information about strange creatures – believed Davis was telling the truth. Chris even took a polygraph test and passed. 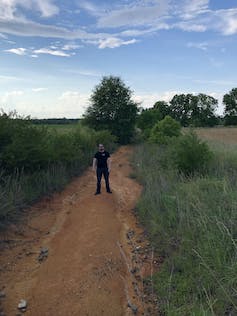 The author on the road where Chris Davis claims he had his encounter with the Lizard Man.

After Davis’ story went public, more sightings were reported, some plausible, some clearly fabrications. Soon armed parties were exploring along the swamp. The media descended on Bishopville. Locals began selling Lizard Man t-shirts and other merchandise. Sheriff Truesdale was interviewed by Good Morning America and CBS’ Dan Rather, and newspapers as far away as South Korea ran Lizard Man headlines.

To this day, the mystery hasn’t been solved, with alleged sightings as recently as 2015. But the chain of events – a strange sighting, media attention, more sightings, followed by visits from curious tourists and monster hunters – have played out in towns across the country, from Point Pleasant to Roswell, New Mexico.

A mystery that terrifies and fascinates

If you believed a monster was real, why would you travel to its alleged lair?

Many find legends like the Lizard Man enthralling. But some become obsessed, longing to know more about something both mysterious and frightening. In these monster hunters, I see elements of religion.

The theologian Rudolf Otto believed there was an essence to religion he called “the numinous.”

Otto claimed that religion is best understood by observing remote cultures where “its primal quality of impulse and instinct” remains intact. To Otto, the numinous is experienced as a mysterium tremendum et fascinans – a mystery that terrifies and fascinates. This feeling arises from an encounter with “the wholly other,” or that which we cannot understand.

While listening to a lecture in Bishopville from Matthew Delph of the Mountain Empire Cryptid Research Organization, I thought of Otto. Delph described his encounter with a Bigfoot while hunting in Indiana, when the creature hurled a log that narrowly missed his head. (Some think Lizard Man was a misidentified Bigfoot.)

Delph recalled, “I was seeing something that’s not supposed to exist.” He was frightened but also haunted by the experience. He explained that his research isn’t so much about proving Bigfoot’s existence but rather a personal need to “face that fear.”

Other festival-goers were seeking less direct connections to the mysterium using material objects and ritual. One researcher explained why he took some bricks and wood from a famous “butterbean shed” near Davis’ alleged encounter, adding, “You want to take something tangible with you because the mystery is intangible.”

While touring the Scape Ore swamp, I heard one anecdote about the Boggy Creek festival in Fouke. Someone said they were such a fan of the legend of Boggy Creek they wanted to be “baptized” in the swamp. The comment was facetious, but it betrayed a desire to something to become more closely intertwined to the mystery.

Cryptozoology might not be a religion, but the first stages of ancient religions may not have looked much different from the practices that form around these cryptid legends.

To me, what makes monster festivals strange are not the creatures they celebrate, but rather the way they facilitate the intermingling of cultures that have traditionally defined themselves in opposition to each other.

The conventional wisdom is that struggling small towns should appeal to a nostalgic time when America was more conservative, more Christian and simpler – not stranger. To be sure, monster festivals always attract local families with smiling children. But to bring in tourism dollars, they have to draw other elements not easily reconciled with what architecture professor Kirin J. Maker calls “the myth of main street.”

There certainly exists what might be called a “cryptozoology tribe” that turns out for these festivals – cryptid fan culture has heavy overlap with horror movie fans, conspiracy theorists and a “psychobilly” aesthetic. Black T-shirts, tattoos and patches for “The Misfits” abound.

These eccentric tastes may be part of the reason small towns usually don’t invest in monster festivals until they have to. The mutation of monsters from bizarre police reports into emblems of the community seems to go hand in hand with the destruction of small town economies by the forces of globalization and urbanization. 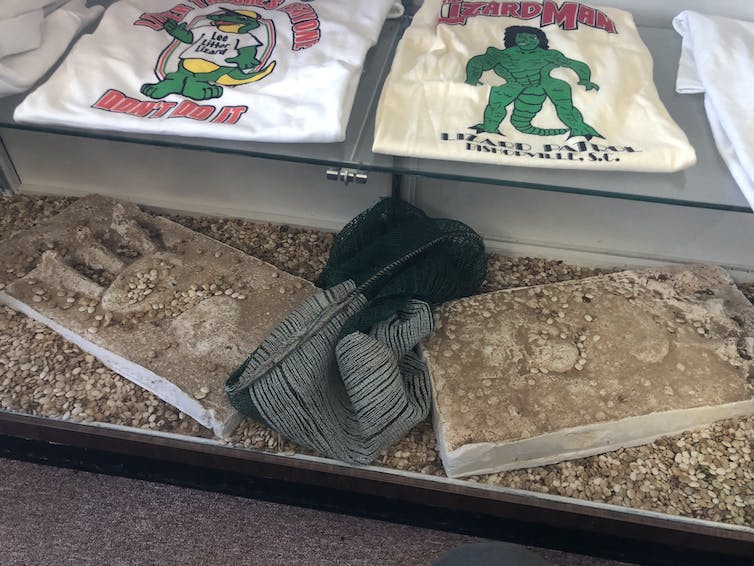 John Stamey, the mastermind behind the Lizard Man festival, modeled it directly on the Mothman Festival in Point Pleasant, West Virginia. Like Point Pleasant, Bishopville has a struggling Main Street with empty storefronts.

Here I see another connection to religious traditions. Pilgrimage has always been an economic phenomenon, and many medieval towns depended on stories of local miracles to draw pilgrims. By inviting in the cryptozoology tribe, today’s small towns are celebrating aspects of local culture that were once pushed to the periphery or mocked. But like the medieval towns of the past, their local economies are getting a nice little boost, too.

At the same time, these festivals draw middle-class urbanites like myself who want to learn more about places that many Americans have forgotten about or fail to understand.

Surely, some in Bishopville would rather forget about the Lizard Man, while some Americans might not have any desire to learn about Bishopville. But America’s strange pilgrims keep drawing our attention to the edges.