The secret behind the success of the new ‘Star Wars’ films 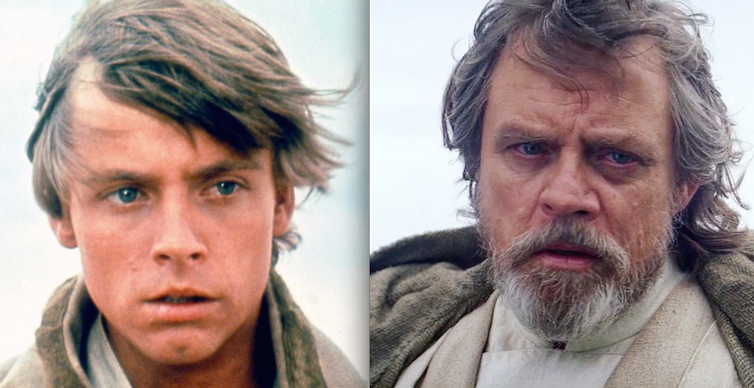 Actor Mark Hammill reemerged in ‘The Force Awakens’ and ‘The Last Jedi.’

In the 40 years since the original “Star Wars” film premiered, the franchise has been a pop culture powerhouse.

“The Last Jedi” – the latest edition in the series – looks to continue the trend, with huge box office returns expected.

It also looks poised to join “The Force Awakens” (93 percent on Rotten Tomatoes) and “Rogue One” (85 percent) as “Star Wars” films that are both commercially and critically successful.

Not all “Star Wars” films have hit that sweet spot. It’s sometimes easy to forget the prequel trilogy – “The Phantom Menace” (1999), “Attack of the Clones” (2002) and “Revenge of the Sith” (2005) – wasn’t met with the same enthusiastic response from critics and fans, and hasn’t been looked upon kindly since.

What made the prequel trilogy such a (relative) dud? Why are the more recent films being so much better received?

If it isn’t broke, don’t fix it

Research I helped conduct on what makes for a good extension (sequel or prequel) may provide some insight.

My colleagues and I tracked audience reactions to sequels and prequels over the course of nearly a hundred franchises, from “Psycho” to “X-Men.”

Our results show that the successful franchises make smaller, gradual updates – rather than sweeping changes – in each successive film. And it fits well with what we know about audience behavior: They seek a balance between the familiar and the new; while they aren’t looking for a carbon copy of the originals, they’re hoping to relive some of the most vivid, nostalgic moments from the first films.

With these findings in mind, let’s reexamine prequel series of “Star Wars.” When “The Phantom Menace,” the first of the prequels, was released in 1999, it had been 16 years since audiences had seen a new “Star Wars” film. (The original trilogy had just finished up a successful theatrical re-release.)

But fans hoping to relive the magic of the originals were in for a surprise.

The beloved trio of Mark Hamill (Luke Skywalker), Harrison Ford (Han Solo) and Carrie Fisher (Princess Leia) gave way to new faces: Liam Neeson, Ewan McGregor and Natalie Portman. Instead of relying on real sets, miniatures and models to pull off the breathtaking special effects in the originals, director George Lucas opted mostly for computer-generated and digital effects. There were also changes to the rules of the “Star Wars” world. The Force was no longer being described as an all-encompassing life force that bound everyone together; it was now being explained as the result of special biological cells called “midichlorians.” (And I won’t even go into the widely loathed Jar Jar Binks.)

Out with the new, in with the old

In contrast the newest film, “The Last Jedi,” includes many of the original cast members. Mark Hamill and Carrie Fisher return to portray Luke Skywalker and Princess Leia, respectively. And it features the popular “hero’s journey” plot device of the original films, in which an ordinary person’s life is unexpectedly upended, and he is thrust into the role of the hero.

We see this phenomenon in other film series and even product lines. Though the lead actor will occasionally change, the James Bond series never strays from its action-film formula. Apple has a similar approach when releasing new iPhones; before taking the leap to a radically new version, it will release an incremental “S” version of the previous model as a bridge.

That isn’t to say the new “Star Wars” films aren’t making any changes: There are more female protagonists, in addition to a host of new characters. But this isn’t exactly shattering fans’ expectations.

Our research also found that the deeper into a franchise you get, the more major changes audiences are willing to accept. The next “Star Wars” trilogy will expand the boundaries of the “Star Wars” world, exploring planets and featuring characters not yet seen on film.

With this move, the studio is willing to bet that audiences are finally ready to accept some major changes in the franchise – something they weren’t quite ready for yet when the prequels were released.

However, in order to ensure the Force remains strong over the franchise’s lifetime, these future films would be wise to continue including at least a handful of nods to the original trilogy.