For Roger Williams, the annual Congressional Baseball Game is personal

“For Roger Williams, the annual Congressional Baseball Game is personal” was first published by The Texas Tribune, a nonprofit, nonpartisan media organization that informs Texans — and engages with them — about public policy, politics, government and statewide issues.

WASHINGTON, D.C. — A few minutes after sunrise not far from the U.S. Capitol, U.S. Rep. Roger Williams called out to fellow Texas Republican Jodey Arrington with a simple instruction for a coming showdown with the Democrats: “throw strikes.”

That’s not much help in the legislative arena, but Williams had another contest in mind. As the manager of the Republican baseball team, he was in the final weeks of preparation for Wednesday night’s Congressional Baseball Game.

The annual matchup — a storied tradition dating to 1909 — combines two important parts of his life. Williams, a former college baseball star, has made the sport a key facet of his political identity, and he brings a level of expertise to his position rare in the amateur congressional outing.

The Republicans are coming off of a decadelong slump against the Democrats — in which they have won just one of 10 games — but Williams, who has an impressive pedigree in both collegiate and professional ball, thinks he has his team poised for redemption.

“These guys know what’s expected of them every day. We get them out of here at 7 o’clock so they can go to their committee hearings, but they know when they’re out here that they’re [playing] baseball,” said Williams, whose district stretches from Austin all the way up near Fort Worth. “No different than Boston and the Yankees playing, you know?” 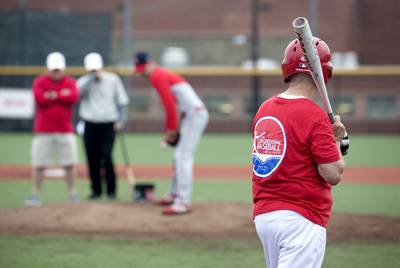 “These guys know what’s expected of them every day,” coach Roger Williams says of his team of Republican members of Congress.

A baseball legend in his hometown, Williams was a local sports hero long before he was a politician. After leading Fort Worth’s Arlington Heights High School to the state playoffs, he went on to an illustrious college career at nearby Texas Christian University, where he earned accolades as an All-Southwest Conference outfielder and was later named to TCU’s All-1960s roster. Out of college, Williams was selected by the Atlanta Braves in the 1971 MLB draft and spent several years in the Braves’ farm system.

After retiring from his playing career, Williams returned to Texas to coach at TCU and later owned and coached the minor league San Antonio Missions.

Even in Williams’ second life, baseball has remained central. He credits the sport for his involvement in politics in the first place: It was through an unsuccessful bid to purchase the Texas Rangers in 1989 that he first met then-presidential scion George W. Bush, and it was Bush who enticed Williams into serving as co-state finance chairman in Bush’s 1994 race for Texas governor, Williams’ first political gig.

And in his 2012 campaign for Congress, Williams said, his success had as much to do with baseball as politics. “I won,” he said, “on a pro-business, entrepreneurial message with a smile on my face. Basically telling baseball stories for the first 15 minutes when I spoke and then answering questions.” 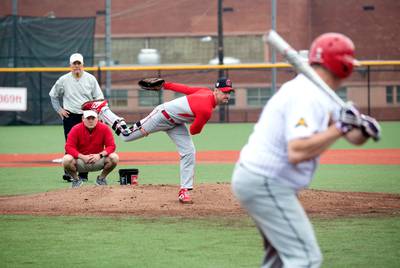 Coached by U.S. Rep. Roger Williams, R-Austin, Republican members of the House of Representatives practice for their annual matchup with their Democratic colleagues, in Washington, D.C. on June 20, 2019. Here, Greg Steube, R-Fla., delivers a pitch. 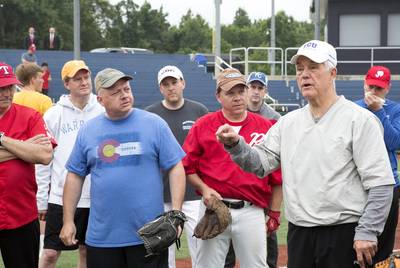 Coached by U.S. Rep. Roger Williams, R-Austin, Republican members of the House of Representatives practice for their annual matchup with their Democratic colleagues, in Washington, D.C. on June 20, 2019.

Players on the Republican team believe his commitment to congressional baseball has put them in a winning position.

“You can tell — both his professional playing and his coaching experience, boy, it really shows through,” said U.S. Rep. Kevin Brady of The Woodlands, a veteran of the team. “Every player on the team feels like they’ve gone up to the next level of baseball because of him.”

As coach, Williams has amped up the intensity of the team’s morning workouts. He scheduled the first day of practice for March 1, months earlier than the team has mobilized in the past. He also moved the practice start time up to 6 a.m. — well before sunrise in the early months of training, when frost still covered the field. And he even recruited major league assistance.

Winning the game and preserving the pride of ultracompetitive politicians may be a challenge, but for many of the aging former athletes, a chance to play in major league park before thousands of fans is a dream in itself. Since 2007, the game has been played in Nationals Park, home of the Washington Nationals, and more than 20,000 people came out to watch last year.

“For that night, you are 18 years old again,” Brady said before listing the slew of injuries he has suffered in two decades of congressional baseball (one broken nose, two torn calf muscles, and a broken and dislocated shoulder). “The next morning, you’re 118 years old and sore as can be.”

But over the last two years, the ritual of early morning practices has assumed an even deeper meaning for much of the Republican team, a result of the shooting at a Republican practice two years ago, in which a gunman fired 70 rounds of ammunition onto the field and injured six people. One of Williams’ staffers, Zack Barth, was shot, and Williams attended the next day’s game on crutches due to injuries sustained diving for cover in the dugout. 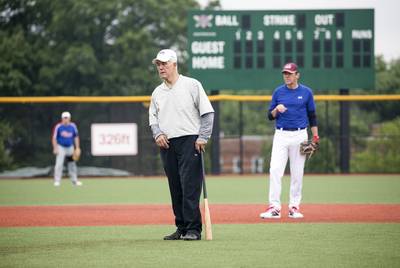 As coach, U.S. Rep. Roger Williams has amped up the intensity of the Republican team’s morning workouts.

“I know personally I wasn’t afraid of dying,” Williams reflected. “But what went through my head was: No. 1, I’m not surprised this is happening; and No. 2, I hope my family remembered I want the song ‘Put Me in Coach’ played at my funeral; and thirdly, I gotta make it through this to see my grandbaby.”

“It’s amazing how the news cycle is. People still come up to me and say, ‘I remember where I was on the day of that shooting,'” Williams said, noting that his stomach for such conversations has evolved over time. “I give a lot of speeches in churches now about how God’s in charge — it’s not about me — about how God’s in charge, and for about the last three months, I’ve been able to deliver it.

Today, Williams wears a wristband stamped with the date of the shooting and the words, “IN GOD WE TRUST.” Many of his teammates wear it as well, a testament to that day’s place in the team’s memory.

“It frankly has brought us all together. We aren’t necessarily colleagues, those of us who were there,” he said, “but we’re teammates.”

If the Republicans hope to pull off the upset Wednesday night, they’ll need all of Williams’ baseball guru powers. The Democrats won last year’s game 21-5, and they have added a potential powerhouse in freshman Rep. Colin Allred, from Dallas, a onetime high school baseball star and NFL linebacker. They also bring back the most feared weapon in the congressional baseball history, their pitcher, Rep. Cedric Richmond of Louisiana, a former ace at Morehouse College who is known now as “the Babe Ruth of Congress.”

“He and I are buddies,” Williams said of Richmond, grinning as he downplayed the prowess of the Democrats’ star player. “He’s a nice guy, as far as I know.”

The Republican manager pushed back against claims that Richmond’s presence makes the Democrats unstoppable. Last year, Williams pointed out, the Republicans managed to get 12 hits off of Richmond, despite the rout, and this year they fielded a younger, more athletic team.

For all of its odd glamour, the congressional game comes with its own politics, a delicate chemistry that former manager and fellow Texan Joe Barton advised Williams would do well to keep in mind.

“You want to do the best you can to win the game. But the congressional team is different in that everyone on the team has got a voting card, and they’re all equal in terms of their ability to vote and move bills and stuff on the floor,” Barton said. “There is some ego involved.”

Still, Williams acknowledged that the congressional game does not call for the kind of nuanced strategizing of his previous coaching jobs. On Wednesday night, he said, the winner will be decided by whichever team can master a simple, two-word approach: “damage control.”

“You want to keep them from having the big inning,” Williams said. “If you keep the ball in front of you, throw strikes and put the ball in play, you’re going to win the game.”

This article originally appeared in The Texas Tribune at https://www.texastribune.org/2019/06/24/roger-williams-congressional-baseball-redemption/.

The Texas Tribune is a nonprofit, nonpartisan media organization that informs Texans — and engages with them — about public policy, politics, government and statewide issues.

Van Romans retires from Fort Worth Museum of Science and History