Texas law requires retired police dogs be auctioned off. Proposition 10 would send them home with their handlers.

“Texas law requires retired police dogs be auctioned off. Proposition 10 would send them home with their handlers.” was first published by The Texas Tribune, a nonprofit, nonpartisan media organization that informs Texans — and engages with them — about public policy, politics, government and statewide issues.

When Jim Skinner served in the Air Force nearly 40 years ago, he extended his tour in the Philippines several times because he wanted to stay with his best friend, Jessie, knowing the two wouldn’t have much time together after his service. 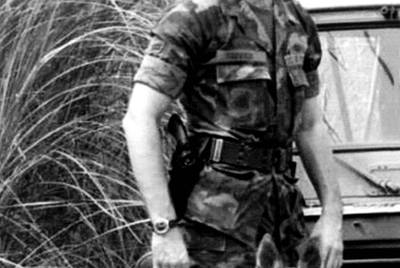 Collin County Sheriff Jim Skinner served in the Philippines as one of the Air Force’s K9 handlers. He extended his tour several times to stay with his dog, Jessie, who was getting near retirement age.

It wasn’t that Jessie, his military service dog, was injured. Back then, military service dogs were often euthanized after they retired. The federal government changed the policy in the early 2000s, allowing them to retire with their handlers or be adopted. But that was only at the federal level. Texas requires retired law enforcement animals – classified as surplus government property – to be auctioned off or destroyed to ensure government dollars aren’t used for private benefit.

On Nov. 5, Texas voters will consider Proposition 10, which would amend the state Constitution to allow retired law enforcement animals, such as dogs or horses, to be adopted by their handlers or another qualified caretaker. A proposal to put the measure on the ballot received unanimous support from the Texas Legislature last spring.

Skinner became the sheriff of Collin County in 2017 and soon after arriving had to retire two members of the K9 unit. So he and his counterparts in Ellis and Tarrant counties sought to change the law to ensure retired law enforcement animals would be allowed to retire with their handlers, the people they’ve spent almost every minute of every day with for years.

“As they get older and more and more used to the families that they’re around, these dogs, they’re like a pet, and they love their handlers and their families,” said Skinner, who is also the chairman of the legislative committee for the Sheriffs’ Association of Texas. “So why not give them the ability if they’re qualified to be a caretaker for their dog?”

David McClelland, the Tarrant County Sheriff’s Department chief of staff, said there was a vacancy in one of the K9 positions when he came in with Sheriff Bill Waybourn in 2017. As they began working on a replacement, they looked at the policies regarding retired law enforcement animals and realized state law prevented them from being easily adopted by their handlers. The county would be required to auction the animal, which creates the risk of the handler being outbid, or euthanize it.

“It’s one of those things that you always wonder why did no pay attention to it?” McClelland said. “It’s something we feel really, really strongly about being in law enforcement.”

“Without this law being in place, you’ve got to go home and tell your 10-year-old why they don’t have their dog anymore,” McClelland said.

Most cities let handlers adopt the retired animals, but counties, McClelland said, are much more restricted.

Before the law could be changed, however, Skinner still had to replace two of Collin County’s dogs. One of them died from liver complications shortly after retiring, and the other, Skinner said, went home with its handler but did not officially retire to avoid the need for an auction. 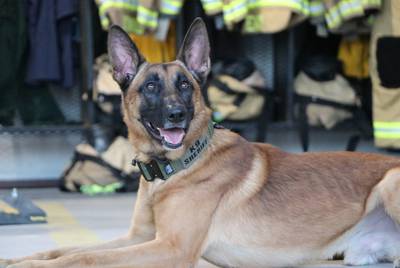 Ferro, a German shepherd, is a patrol and narcotics detection dog for the Collin County Sheriff’s Department.

“Police dogs develop a special bond with their handler, and – after a lifetime of public service – deserve to spend their golden years with their companion,” Nelson, R-Flower Mound, said in a statement. “These dogs should not be auctioned off as property.”

Proposition 10 exempts law enforcement animals from the state’s surplus government property rules. Its companion legislation, Senate Bill 2100, includes measures to ensure that retired law enforcement animals, if they are not adopted by their handler, will be taken in by someone properly equipped to care for them, and if an animal’s handler is injured or killed in the line of duty, the handler’s family can adopt it. Gov. Greg Abbott signed SB 2100 into law on May 14.

Reid Golson, a deputy sheriff for Collin County, said he spends more time with his K9 partner, Olex, who stays with him at home along with traveling with him at work, than he does his own family.

“You spend so much time with with these dogs … they become a part of the family,” Golson said. “When they retire, I think they should be able to enjoy their retirement with who they’ve been with for the past five years and not put them in another environment that they’re not familiar with.”

Skinner, who said hehas already voted for Proposition 10 during early voting, said the support the legislation got showed him how much people care for dogs, especially those that help keep communities safe.

“People can relate and understand when we talk about these brave and heroic police dogs that are out here working day in and day out with these handlers,” Skinner said. “They make great sacrifice. I mean, there’s a lot of dogs that die in the line of duty … because we ask (them) to do things that otherwise we would have to go do. They carry the day.” 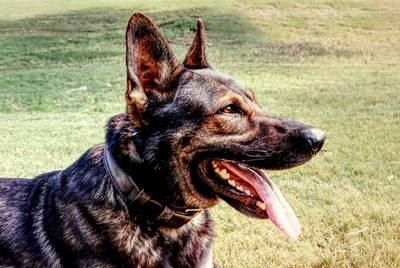 Olex, a 3-year-old German Shepherd, works for the Collin County Sheriff’s Department as a patrol and narcotics detection dog with his handler, deputy sheriff Reid Golson.

This article originally appeared in The Texas Tribune at https://www.texastribune.org/2019/10/31/proposition-10-would-allow-texas-police-dogs-be-adopted-handlers/.

The Texas Tribune is a nonprofit, nonpartisan media organization that informs Texans — and engages with them — about public policy, politics, government and statewide issues.