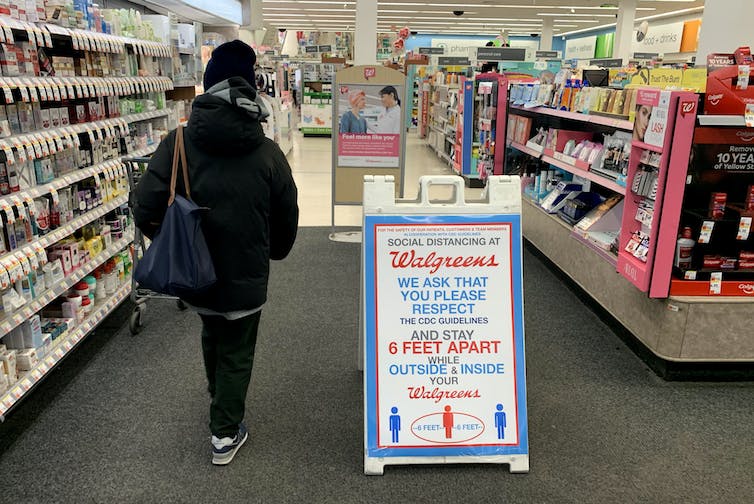 Social distancing is one of the key ways to keep the coronavirus from spreading.

Amid harsh isolation efforts to stop the spread of COVID-19, it’s only natural to ask how a microscopic agent can kill thousands of people, topple economies and disrupt life for hundreds of millions of people.

COVID-19, the disease caused by the body’s reaction to this new viral invader, is wreaking havoc for three main reasons. It is a new disease from a virus that has never infected humans before, so humans have no natural immunity to it. Second, there is no vaccine to prevent COVID-19. Third, there are no drugs to treat it. Once it begins spreading in a community, it sickens and kills.

This leaves social isolation and quarantine as the best ways to prevent the spread. The only way to treat it is with comfort care, which includes providing breathing assistance through ventilators when necessary. People who die from it often die alone because of the risk of infection.

But prevention efforts, even with isolation and quarantine, have been hampered here in the U.S. by an ongoing shortage of reliable tests. Without knowing who has it, it’s impossible for health officials to know how widespread isolation should be, or how long it should last. Caring for the thousands who have the disease has led to governors of many states begging for more personal protective equipment for hospital workers and respiratory equipment for patients.

Yet some countries already seem to be stemming the spread and flattening the curve. In China, the number of new cases is leveling off. Now there are a few hundred per day, as opposed to thousands of new daily cases just weeks ago. Similarly, countries such as Singapore, South Korea and Taiwan have been commended for their efforts to slow disease spread despite their proximity to China.

As a professor at the Texas A&M School of Public Health, my expertise is in disaster epidemiology and public health emergency preparedness. With cases burgeoning in the U.S., I believe many Americans can learn from other nations and our own history with pandemic disease.

Lessons from the past

Pandemics are not new. In 2003, a SARS (severe acute respiratory syndrome) outbreak resulted in more than 8,000 cases in 26 countries. In 2009 as many researchers were focusing on H5N7, a version of the influenza virus that is widespread in poultry, a swine-related flu known H1N1 was reported in California. H1N1 was unique in that younger people seemed to have no natural immunity, while seniors did, probably due to prior exposure to a similar H1N1 strain.

SARS and H1N1 were bad, but their transmissibility does not match COVID-19, which is much more contagious. Compared to the coronavirus, they were brought under control rather easily. But from these outbreaks, public health officials learned a lot about the effectiveness of public health interventions. Quarantine, hand hygiene and social distancing are the best-known. But other interventions emerged during those earlier pandemics and are now receiving scrutiny once again.

In the age of coronavirus, a similar program would clearly lessen the burden on the health care infrastructure. There are websites currently offering symptom information and risk assessment tools based on CDC guidance, but no form for those who are self-isolating to track the progression of their symptoms.

Drive-through “fever clinics,” common in 2009, were the antecedents to the drive-through COVID-19 test sites now opening throughout the country. But success has been mixed. In Texas, early reports from COVID-19 drive-through testing indicate they have been successful, with other states having logistical issues. In Colorado, some waited for hours only to be told to go home; they were out of test kits for the rest of the day. 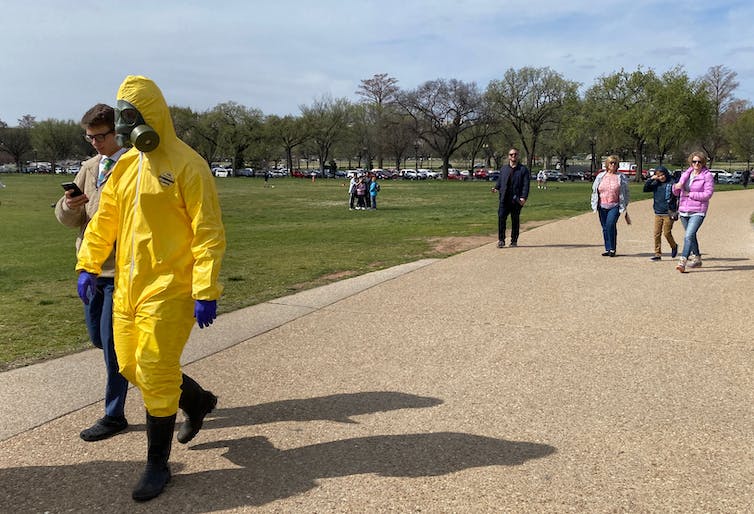 Tourists in D.C. walk near the Washington Monument despite the COVID-19 outbreak, March 22, 2020.

Lessons learned from other countries

Some other countries have been successful at stemming the spread of COVID-19 while the U.S. has struggled. There are several reasons.

One big difference was that success in other countries was linked to the early initiation of widespread testing. That said, some reports suggested that these early tests were not as sensitive as they should have been, meaning they potentially failed to capture a number of positive cases.

Also, the communication of quarantine and social distancing guidelines from government officials was transparent and consistent. A rapid response regarding border closures, community lockdowns, event cancellations and school closures were critical in Taiwan, South Korea, Singapore and China.

Other countries, particularly Italy and France, were far less successful. The biggest problem: people not complying with the social distancing mandates, or not understanding them. This includes a failure to fully detail instructions for quarantining a home where multiple generations of a family live together. Without proper communication, exposure is increased.

Yes, some countries adopted somewhat draconian measures, including government charges or hefty fines for failure to comply with government directives.

How might the U.S. implement less stringent actions to better protect its people?

It won’t be easy. In other countries, most authority resides with its federal government; states, counties, provinces and communities generally have far less power. This consolidation of power makes it far simpler to initiate broad, sweeping mandates that are easier to enforce. Activating the military in other countries, for instance, is less complicated than here in the United States. These are also countries where following the rules is part of the social norm.

Our Founding Fathers, fearing tyranny, framed our Constitution so that much of the power resides at the state level. The Posse Comitatus Act limits the military’s role in emergency response to the states. So what the U.S. has now is a federal government developing solutions founded on evidence-based guidance; individual states are then charged with making operational decisions based on that guidance. But each state has a different capacity to respond. Developing a unified “American” response will be a challenge.

What individuals can do

The best action individuals can take at the moment: Don’t panic. Be smart. Experts know that social distancing, frequent hand-washing and not touching your face, particularly after contact with surfaces outside the home, all work to slow the outbreak. And, without natural immunity, a vaccine or medicines, they are the most effective weapons available to halt the COVID-19 outbreak.

The U.S., with its commitment to individual liberty and a “bottoms-up” approach to emergency response, is vastly different from other countries. But let’s not make the American spirit a hindrance. Instead, let’s leverage it by using personal responsibility to slow the spread of COVID-19.

[You need to understand the coronavirus pandemic, and we can help. Read our newsletter.]

Glove manufacturer to open its largest manufacturing facility in Fort Worth

Glove manufacturer to open its largest manufacturing facility in Fort Worth