Housing Rush: Construction on TCU Greek village set to begin in May

Cranes and bulldozers have become a common sight on Texas Christian University’s campus with the renovation of nearly every residence hall, the most recent being Colby Hall, which reopened last year.

But there’s one group of residences that hasn’t been hammered on yet – the fraternity and sorority houses, located between Bellaire Drive North and West Berry Street.

That will soon change when construction for 11 new Greek houses begins in May. Phase 1 consists of seven houses: six buildings to hold 13 sorority chapters and one building to hold two fraternity chapters. The first phase will be built on empty land, part of which used to be a parking lot and the former site of Brachman Hall. Once construction finishes (the plan is to finish by August 2017), students will move into the new houses, and their former houses will be demolished to make room for Phase 2 of the project, which consists of four houses that will hold the remaining 10 fraternity chapters. The entire project is expected to be finished by 2018, and once it’s done, all 25 of TCU’s Panhellenic and Interfraternity Council organizations will have housing in the same spot.

There will also be room to add a 12th building at a future date, said Craig Allen, TCU director of Housing and Residence Life.

TCU declined to reveal the cost of the project, said Holly Ellman, associate director of strategic communications management, but Allen said financing comes from a mix of private funds and debt service.

The Greek village is a project by Dallas-based contractor The Beck Group and New York-based designer KSQ Design.

Each house will be four stories and have elements such as round columns and wide porches, mimicking Greek architecture, said David Short, managing principal at KSQ Design. Each building will house several chapters, with varying brick colors and stone accents on the façade to give each chapter its own identity.

There will also be a nod to the smaller, historically black Greek letter organizations on campus that don’t have enough members to fill an entire facility, according to Brooke Scogin, director of Fraternity and Sorority Life at TCU. Those organizations, part of the National Pan-Hellenic Council (NPHC) and known as the “Divine Nine,” will have a colonnade monument built in the Greek village.

NPHC President Kaillyn Lewis said in a statement that the monument would “symbolically and physically represent each organization’s presence on campus and give alumni and current members a location for reflection and celebration.”

Amenities in the houses include chapter meeting rooms, event space, laundry areas and full kitchens, along with bedrooms.

It’s a project long overdue, Allen said. The seven existing Greek houses, built in the 1960s, are the oldest residence facilities that have not undergone a renovation.

Craig said the current houses are “outdated,” lack elevators and don’t have enough space to fit all the Greek organizations on campus. Two fraternities, Sigma Phi Epsilon and Sigma Nu, don’t have houses.

Twenty-year-old sophomore Ally Faust, who lives in the existing Gamma Phi Beta house, said she was fortunate to get a space in what’s known as “the Greek.” When she submitted her housing application last year, she remembers some students getting turned away due to lack of space, she said.

“That was just a negative thing because it’s a once in a lifetime opportunity to be able to live in the house,” she said. “It’s sad when not everyone can do it.”

Allen said Greek housing can hold about 600 students. More than 540 students currently live in Greek housing, and that number is expected to jump to between 800-850 by the time construction on the Greek village finishes in 2018. Part of that increase is due to a new sorority, Phi Mu, coming in the fall. TCU’s enrollment has also jumped 12.9 percent since fall 2010. The new Greek houses will have 781 beds total.

The houses are part of a grander scheme to rebuild an area of campus known as Worth Hills, named after the golf course that used to be there. The project covers about 19.2 acres from the corner of Stadium Drive and Bellaire Drive North to Pond Drive. The project started with the construction of residence halls Marion, Clark and Hays, all of which opened by 2014. The Multipurpose Building, home to dining and study space, followed in 2015. A parking garage is under construction and set to finish in the fall.

Once the Worth Hills project is done, Marion, Clark, Hays and the Greek houses will have a combined 1,342 beds available for students.

The project has encountered some minor vandalism. On April 8, someone threw a rock at a bulldozer, breaking its window. In another incident construction equipment was damaged with paint.

Security cameras have since been installed to monitor the work area, but so far the incidents have been relatively small and have had no impact on the project’s schedule, said Lindsay Reeds, senior assistant project manager at KSQ Design.

“It’s usually just a few people that are doing these kinds of things,” she said. “Maybe they can stop it, but work goes on. We’ll deal with it as it comes.”

Allen said TCU is looking forward to the new houses.

Faust said that even though she plans to live off campus by the time the new houses are finished, she’s excited for the students who will be living there.

Navigating through the cranes, bulldozers and construction won’t be fun, but Faust said it’s “all going toward a good cause.”

“It’s a really exciting time because we’re about to build the new houses and really expand the Greek community on campus,” she said.

What Worth Hills once was

Before becoming the stomping ground for TCU’s fraternities and sororities, Worth Hills was a city-owned golf course. The Worth Hills Municipal Golf Course opened in 1923 and closed in 1961, when the city sold the land to TCU.

The 18-hole course began near where TCU’s Multipurpose Building now stands and covered about 100 acres south and west, up to what’s now the Lowdon Track and Field Complex. Golfers would start by the clubhouse and follow a path that cut in and out through what’s now Lupton Stadium and the tennis courts. The back nine would take golfers along the existing Greek houses and circle back to the clubhouse.

The course was nicknamed “Goat Hills” due to its rough, hilly terrain. The story was, if you hit a ball too far, you’d need the strength of a mountain goat to climb around the course and get the ball back, said freelance writer Mark Mourer, who’s written about TCU for more than 20 years.

Famed sportswriter Dan Jenkins used to play the course with his friends and memorialized his experiences in books and articles, such as his 1965 Sports Illustrated piece, “The Glory Game at Goat Hills.”

“The Worth Hills course meant a lot to many of us who spent our boyhood and early manhood there,” he wrote in an email to Fort Worth Business. “Too many hilarious golf games to go into, but I’ve written about them in numerous books.”

The land today has little to no remnants of the old course, and with the coming of TCU’s new Greek village, the memory of the Worth Hills golf course is fading further into the distance, Mourer said.

But in some ways, the new Worth Hills project is history repeating itself. Jenkins’ Sports Illustrated article was published four years after TCU acquired the course to build the first Greek houses. The article opened with the words, “Goat Hills is gone now. It was swallowed up almost four years ago by the bulldozers of progress…”

Mouse over the map of Worth Hills to see what TCU buildings stand there today. Locations are approximate. 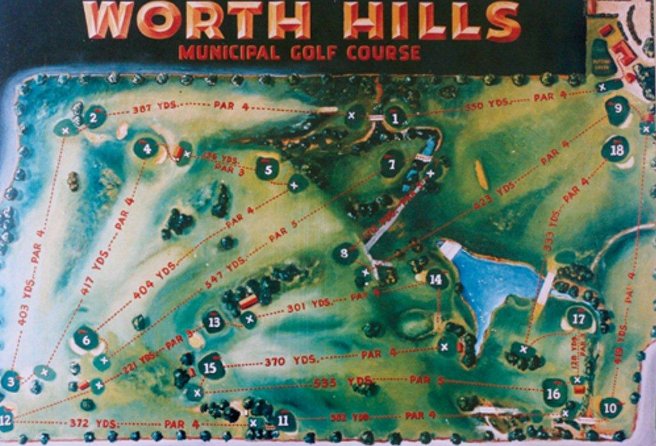