How building design changed after 9/11 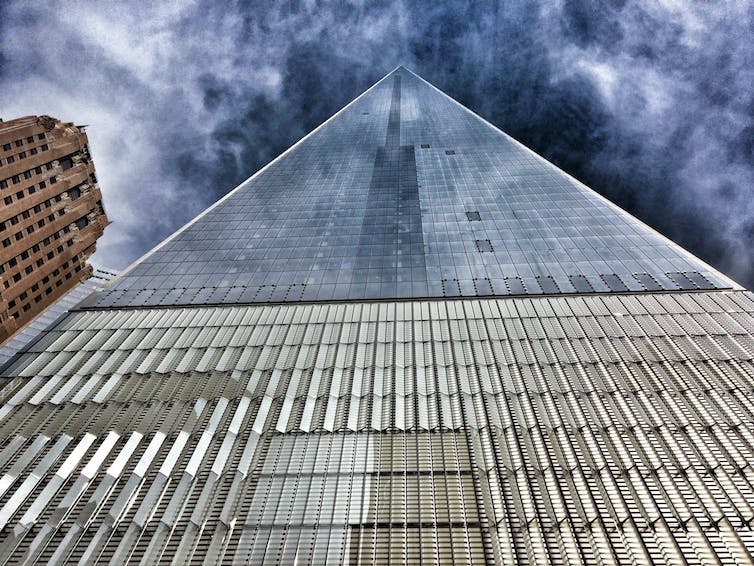 The new One World Trade Center building, made with high-performance concrete.

When buildings collapse killing hundreds – or thousands – of people, it’s a tragedy. It’s also an important engineering problem. The 1995 collapse of the Alfred P. Murrah Federal Building in Oklahoma City and the World Trade Center towers in 2001 spawned many vows to never let anything like those events happen again. For structural engineers like me, that meant figuring out what happened, and doing extensive research on how to improve buildings’ ability to withstand a terrorist attack.

The attack on the Murrah building taught us that a building could experience what is called “progressive collapse,” even if only a few columns are damaged. The building was nine stories tall, made of reinforced concrete. The explosion in a cargo truck in front of the building on April 19, 1995, weakened key parts of the building but did not level the whole structure.

Only a few columns failed because of the explosion, but as they collapsed, the undamaged columns were left trying to hold up the building on their own. Not all of them were able to handle the additional load; about half of the building collapsed. Though a large portion of the building remained standing, 268 people died in the areas directly affected by the bomb, and in those nearby areas that could no longer support themselves. (A month after the attack, the rest of the building was intentionally demolished; the site is now a memorial to the victims.) 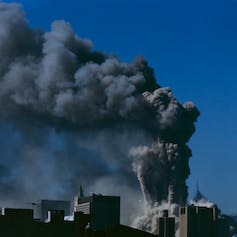 The progressive collapse of the North Tower.

A similar phenomenon was behind the collapse of the World Trade Center towers on September 11, 2001, killing nearly 3,000 people. When exposed to the high temperatures created by burning airplane fuel, steel columns in both towers lost strength, putting too much load on other structural supports.

Until those attacks, most buildings had been built with defenses against total collapse, but progressive collapse was poorly understood, and rarely seen. Since 2001, we now understand progressive collapse is a key threat. And we’ve identified two major ways to reduce its likelihood of happening and its severity if it does: improving structural design to better resist explosions and strengthening construction materials themselves.

Research has found ways to keep columns and beams strong even when they are stressed and bent. This property is called ductility, and higher ductility could reduce the chance of progressive collapse. It’s a common concern when building in earthquake-prone areas.

In fact, for years building codes from the American Society of Civil Engineers, the American Institute of Steel Construction and the American Concrete Institute have required structural supports to be designed with high enough ductility to withstand a major earthquake so rare its probability of happening is once every 2,000 years. These requirements should prevent collapse when a massive earthquake happens. But it’s not enough to just adopt those codes and expect they will also reduce or prevent damage from terrorist attacks: Underground earthquakes affect buildings very differently from how nearby explosions do.

Another key element structural engineers must consider is redundancy: how to design and build multiple reinforcements for key beams and columns so the loss of, say, an exterior column due to an explosion won’t lead to total collapse of the entire structure. Few standards exist for redundancy to improve blast resistance, but the National Institute for Building Sciences does have some design guidelines.

The materials that buildings are made of also matter. The steel columns in the World Trade Center towers lost strength rapidly when the fire reached 400 degrees Fahrenheit. Concrete heated to that temperature, though, doesn’t undergo significant physical or chemical changes; it maintains most of its mechanical properties. In other words, concrete is virtually fireproof.

The new One World Trade Center building takes advantage of this. At its core are massive three-foot-thick reinforced concrete walls that run the full height of the building. In addition to containing large amounts of specially designed reinforcing bars, these walls are made of high-strength concrete.

An explosion generates very high pressure – how much depends on how big the blast itself is, and how close it is to the structure. That leads to intense stress in the concrete, which can be crushed if it is not strong enough. 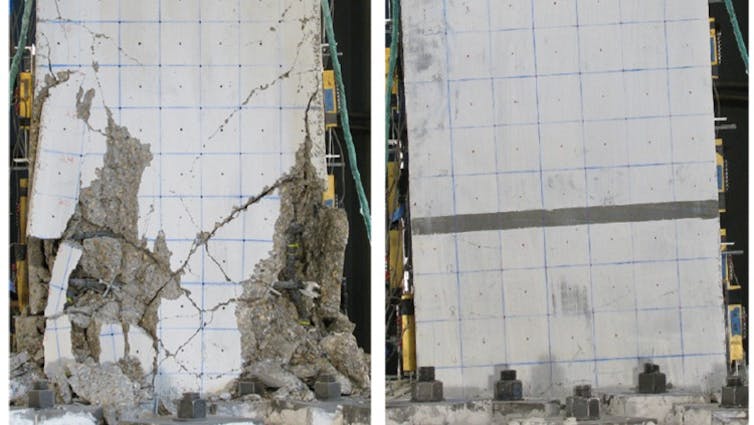 Regular concrete can withstand 3,000 to 6,000 pounds of compression pressure per square inch (psi); the concrete used for One World Trade Center has a compressive strength of 12,000 psi. Using materials science to more densely pack particles, concrete’s strength has been increased up to 30,000 psi. 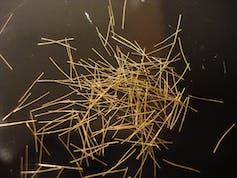 High-strength steel fibers like this are mixed into concrete to make it even stronger and tougher.

While traditional reinforced concrete involves embedding a framework of steel bars inside a concrete structural element, recent years have brought further advancement. To enhance concrete’s toughness and blast resistance, high-strength needle-like steel microfibers are mixed into the concrete. Millions of these bond with the concrete and prevent the spreading of any cracks that occur because of an explosion or other extreme force.

This mix of steel and concrete is superstrong and very ductile. Research has shown that this material, called ultra-high-performance fiber-reinforced concrete, is extremely resistant to blast damage. As a result, we can expect future designers and builders to use this material to further harden their buildings against attack. It’s just one way we are contributing to the efforts to prevent these sorts of tragedies from happening in the future.