How do forensic engineers investigate bridge collapses, like the one in Miami? 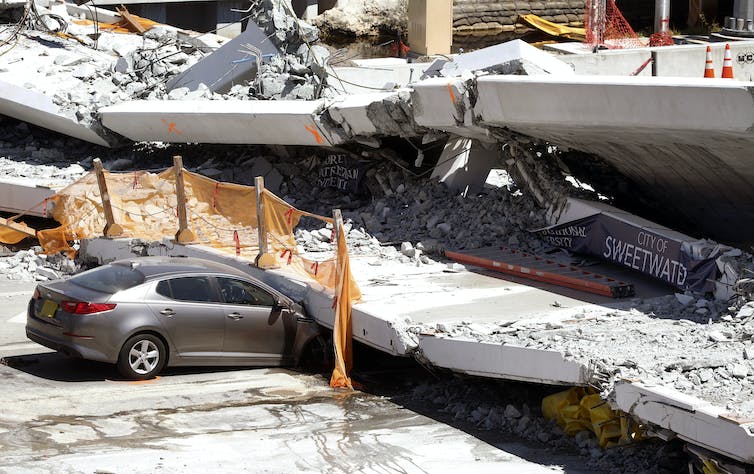 What caused this bridge to collapse?

On March 15, a 950-ton partially assembled pedestrian bridge at Florida International University in Miami suddenly collapsed onto the busy highway below, killing six people and seriously injuring nine. Forensic engineers are taking center stage in the ongoing investigation to find out what happened and why – and, crucially, to learn how to prevent similar tragedies in the future.

I’m not actively involved in this investigation, but I’ve been a forensic engineer for nearly 20 years and am the 2018 president of the National Academy of Forensic Engineers. Similar to forensic scientists, we visit scenes of disasters and crimes to determine what role engineering practices played in what happened. The first step in any forensic investigation, collecting evidence, often can’t begin until survivors are rescued and victims are recovered. Those operations displace material and can damage evidence, which means forensic engineers must study the emergency response as well, to be able to tell whether, for instance, a support column collapsed during the event or was destroyed to reach a victim in need of help. During the FIU recovery efforts rescuers used large equipment to break up massive blocks of concrete so that victims’ bodies could be recovered.

In Miami at the moment, forensic engineers and technicians from the National Transportation Safety Board are on the scene. Right now they’re collecting samples of materials from the bridge to test for their physical properties. They’re reviewing drawings and plans, and examining both industry standards and site engineers’ calculations to understand what was supposed to be built – to compare with what was actually constructed. They’ll look at photographs and videos of the collapse to identify the sequence of events and locations of key problems. Of course, they’ll also talk to witnesses to find out what workers and passersby saw and heard around the time of its collapse. 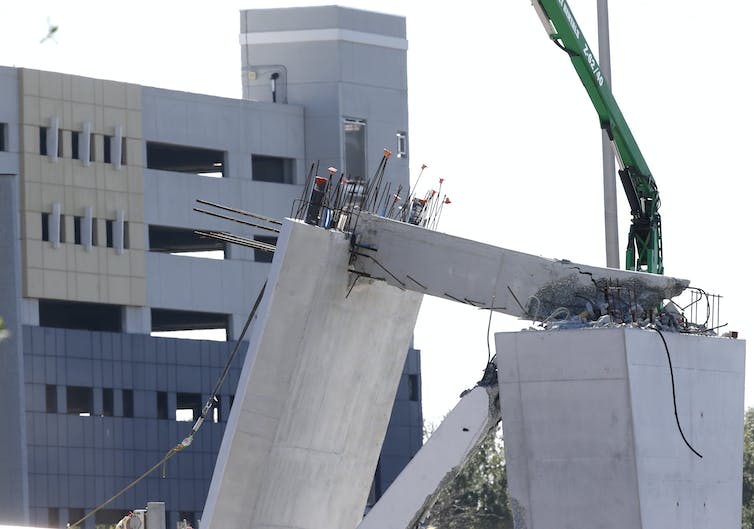 Every element holds clues to what happened – including the cracks in the concrete and stress marks in the metal rods.

Then they’ll combine and analyze all that data and information to identify as clearly as possible what went wrong, in what order. Often there are many factors, each leading to or amplifying the next, that ultimately caused the disaster. Putting that puzzle together is a key part of the forensic engineer’s role.

The FIU bridge was being built using a method called “accelerated bridge construction,” with separate sections that needed to be put together: The footings were installed beside the road and the span was built nearby and lifted into place just days before the collapse. In a plan like that, each piece must be able to withstand the forces acting on it as they’re all being put together. A weakness in one place can cause problems elsewhere, ultimately leading to catastrophe.

Two key elements of the bridge design, the tall center pylon and pipe supports, were not yet in place when the structure collapsed. They hadn’t been scheduled to be added until later in the process – and the bridge wasn’t slated to open until next year, so it’s likely that the project’s designers and engineers expected the bridge segment to hold while construction continued. 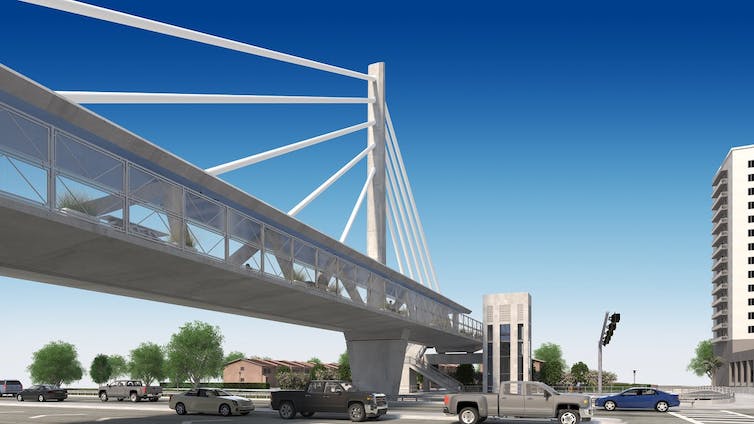 An artist’s rendering of what the final bridge was supposed to look like.

Part of a forensic engineering evaluation will investigate whether that was a reasonable expectation, and whether those missing elements reduced the strength of what was there enough for it to collapse.

There are some other publicly available clues, too, that shed light on avenues likely under investigation already. Dashcam video of the bridge collapse seems to indicate that the initial failure was very close to the north end of the structure. It has been reported that a couple of days before the collapse, a crack had been discovered near the bridge’s north end. Additionally, the bridge span might have been either undergoing stress testing or other adjustments when it collapsed. It’s too early to say now – but the inquiry will certainly reveal – whether the crack and the stress testing put too much load at the north end of the bridge.

There will be other questions too, like “Why didn’t they use temporary supports to shore up the bridge?” There may be a perfectly sensible explanation: Perhaps the bridge was supposed to be strong enough to support itself, for example. Or maybe temporary supports would have created a traffic hazard on the road below.

Some of those questions will not be entirely engineering-related. For example, many are asking “Why wasn’t the road closed?” The Tamiami Trail was shut down for a few hours while the bridge span was put in place. But then it was reopened to cars – a decision that would have been informed by engineering, of course, but could also have been influenced by concerns about public safety or traffic congestion.

At the moment, many of the questions the public has are also being investigated by forensic engineers. Their goal is to ensure that eventually those questions are all answered, and many more as well, about designs, materials, processes, procedures and safety precautions. Those lessons will inform not just any replacement for this particular bridge in Miami but future bridge construction projects elsewhere in the country and around the world, as the rest of the engineering community takes lessons from whatever the investigation uncovers, so builders can avoid similar mistakes – and tragedies. In a sense, it is fortunate that one of the leading centers for accelerated bridge construction is right on the FIU campus.